The past three weeks I have been off adventuring the world.  It was an interesting time away and I learnt a lot about loneliness and alone-ness, but I will write more on that later.

This is about Me, Martha and our journey with Alzheimers 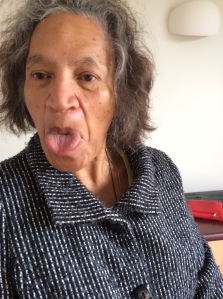 I am fortunate to have an amazing group of friends in Christchurch.  Dedicated to me and Mum and our wellbeing.  While I was away they visited her at the Hoon Hay Dementia unit.  I spoke with her occasionally and reassured her that I would be back in no time at all.

On my return the first thing I did was go and pick her up.  I was shocked.  Her appearance had really deteriorated and so had her mental state.  I was not prepared for this. Her facial hair had grown out and her skin was extremely dry from the air conditioning, she was frail looking and a little unsteady on her feet.  I took her too her room and we packed her things up, I washed her face and put moisturizer on it to try repair the damage that had slowly been happening.  Our first stop was to get her upper lip and eye brows down.  She looked a lot better but then I noticed the muttering. I guess after the initial excitement that we were together again her reality took over once more.

She was talking to someone, a very vivid hallucination.  From everything I have read I know not to argue with her, I pat her arm and tell her it’s ok. That night we get to sleep early.  I have my fingers crossed that a good nights rest will set her ok and maybe her hallucinations won’t be as bad. Thursday rolls around and it isn’t good.  Her world and mine are the same to her.  She talks to me as if I am here but she isn’t talking to the physical me, it occurs to me that she does not know the difference any longer and I wonder if  this is how she coped while I was gone.  By communicating with me, by interacting in her reality with me, when I was thousands of km’s away.

Throughout the day her hallucinations become more vivid, I don’t quite know what to do or how to explain it to others.  I feel nervous and embarrassed but I know it’s fine.  I know people don’t mind but it is still a challenge.  I feel stunned as well, how could this happen. It was just three weeks and the injustice of Alzheimer’s starts to feel heavy again.  I’m constantly telling her to just be quiet, not in an attempt to stop the hallucinations but she is becoming louder and louder.  More vivid and interactive and more disturbed by her hallucinations.

We head out for dinner and I talk to her in the car, I tell her it’s ok, but she is worried about a friend, we get out and she starts walking the other way.  “Mum, it’s this way” she continues to walk and I catch up with her to guide her back, she insists she is going to see our friend and becomes defiant and frustrated with me.  I physically have to turn her around and march her back, she pulls against me and I feel nervous for us.  Other people see our interactions and they don’t know what is going on, only that I am pulling at the arm of this woman.  “Please Mum, come on, it’s cold” she wants to leave, I push down the urge to argue with her and tell her to stop being so stupid. She can’t control what is happening.  I close my eyes and remind myself, it is the disease. This is not Mum.

My reality changes in an instant. I feel my world start to crumble, a thought comes back to me once again, ‘I thought we had more time.’  I want to scream at the world, I want to throw a tantrum at how unfair this is, how unfair it is to me, but how cruel it is to Martha, to all Alzheimers sufferers.  We make it inside, every part of me wants to run and hide, I want to escape this reality.  We sit and chat and I’m not fully there, my brain is burning, what should I do? Is this it? How will I cope? Focus – Focus – Focus.  One day at a time.

I’m exhausted by the time we get home, and it is a challenge to say sane, to hold back the tears that are stinging my eyes.  I get mum’s clothes, I turn the shower on, I make sure she gets in the shower, I get us ready for bed.  I’m tired and agitated by this new reality.  We go to bed and the talking does not stop, I reassure her that it is going to be ok.  I reassure myself.  It is ok.

If you resist it, it’ll be cruel to you, if you let it in, it’ll be magic!

3 Comments on “A lot changes in three short weeks…”