Wellbeing, Round12 and Tania Barry

By the end of October 2013 I felt utterly defeated, I was four months into being the sole career for Mum.  I had lost a parent.  I had packed/cleaned/moved/sold a house.  I had relocated Mum to Christchurch.  I was working a full time job I no longer enjoyed.  I was making poor eating choice, not exercising and not sleeping.  I was exhausted.

I decided it was time to start investing in myself, my mental and physical wellbeing were in jeopardy and if I didn’t do something soon I would end up six feet under for some reason or another.  So I invested.  Time and money were two things I could afford and so I set aside both of those things to dedicate to me.  I dug out health and wellbeing books I had bought and never read; and I Google searched “personal trainers Christchurch.”  Round12 popped up, emails were sent back and forth and I was all booked in!

Anxious and excited I stepped into Round12, it was humming and a general sense of excitement sat in the air along with the stench of hard work.  I stood awkwardly staring at my phone not knowing what to do, where to go or who to speak with; a woman waved at me, strode over and with a big smile said “you must be Kyrin, I’m Tania – come with me.”   The beautiful, wonderful, enthusiastic Tania took me down the back and we got straight into it.  No assessments, no weigh-ins, no judgment.  For the first time ever at a gym I felt comfortable to be unhealthy.  Tania offered no-judgment of my size and for that I was overwhelmed with gratitude. 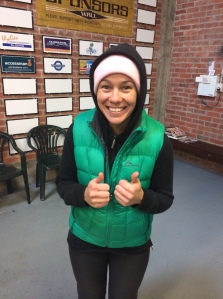 From this one session I had found a happy place.  I pre-paid ten sessions (which FYI are extremely well priced) and so it began, an addiction to exercise I had never felt before.  On my second session I was put to a test of 50 punches, two press-ups, two burpees’, two squat jumps.  Going up to twenty.  It seemed like an impossible task, and in this session it was.  It took the full 45 minutes.  I struggled physically and mentally to complete the task.  I wanted to cry.  After that session I couldn’t walk for days, it wasn’t a mental satisfaction to complete it.  It was a highlight of how unfit I truly was.  I was disappointed in myself.  But as I continued to see Tania, and as she continued to make me do the dreaded burpee I began to gain confidence that I was getting better.  Two months after this initial test, I completed it in 13minutes 17 seconds.  A feat I never thought possible.  A physical highlight but more importantly for me a sense of satisfaction and mental determination I had not experienced in a while.

After a quick trip off to the states I arrived back to Christchurch and was straight back at the gym, training hard, pushing myself into learning a new way of life.   I craved exercise like I had previously craved cake.  It was now a full on addiction and I was really starting to see the results.  In my short time on this earth I have spent countless dollars on gym memberships and personal trainers, all to no avail.

Round12 offers family in its entirety; support, love, encouragement, honesty and so much more.  Not only is it a world class gym, it is a caring and loving place.

Round12 offered me a chance to heal my emotional wounds as I addressed my physical inabilities.  It is a place where judgment is not a word that exists, where can’t is banished from vocabulary and where you are pushed beyond your limits with an encouraging “you can do this, look at what you have already done!”

A massive thank you Round12 and an even bigger thank you to Tania for being an amazing personal trainer, a role model and an inspiration.